Yet again, another horrifying rape case shakes India, reminding us of the rampant violence 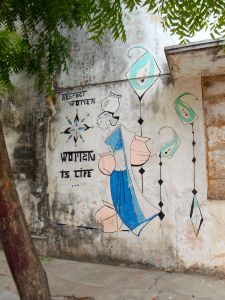 against women in the country. However, I think I’m mostly baffled by the lack of analyses of why these acts of violence occur in the first place. How can one expect a society to respect girls and women when families only want boys? What kind of signals does it send when the birth of a daughter is of less value than that of a boy, and mothers are blamed when they don’t have any sons? The ramifications for the country’s demography are serious, when so many female embryos are aborted. It seriously skews the sex balance in the country, and leads to a large surplus of boys and men. This leads to many men having difficulties in getting married, and women become sources of frustration and anger, which in turn leads to the horrific cases of rape and sexual violence. It also leads to an increase of trafficking of the most vulnerable girls and women, and sex slavery. In addition, how can one expect people to have a natural relationship to the opposite sex and sexuality when they live so segregated from each others, and normal  interactions are restricted? When girls’ and young women’s worth only equals their chastity and virginity status?

Things are changing in the cities, but in many parts of the country, traditions and conservative gender stereotypes still prevail. Nobody wins from this, and both women and men suffer from the consequences.

I am so tired of people who asks if I am a feminist. REALLY? You are a feminist??? But you seem so nice! Sigh. 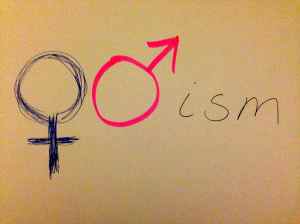 So what should we call it?

And then I have to explain again, and again, and again, that feminists are NOT man hating harpies who want world domination of women. Surprise surprise! And no, feminism is NOT about eradicating all differences between women and men. Yes, there might be feminists who hate men, but that’s like saying that all Muslims are terrorists: It’s a small, extremist group, who gives everybody else a bad reputation.

It seems like a lost battle to re-invent the word “feminism”. It is too tainted and bad-mouthed.

So what should we instead call people who just want all human beings to have the same rights and opportunities in life? Both legally, and de-facto? But who acknowledge that biologically and historically there might be some disadvantages to one sex, which requires the system to take certain pro-active measures into consideration for there to be real equity? Who don’t want to force all women to work and be the breadwinner in the family, and who don’t want all men to cry and take one year of parental leave? But who nonetheless want everybody to be able to do exactly that if they want to, and to take individual choices which break with traditions and stereotypes, without being discriminated for it? (It’s really not too much to ask for, frankly.)

So what kind of -ism should we use? “Masculism”, the counterpart to “feminism”, could be an option. But both words share the common problem that the concept itself implies the preference of one sex, even though it doesn’t necessarily mean that. “Humanism“? As good as it could have been, it does have a different meaning in how it is used today, which goes beyond gender equality. “Equalism“? Nah. Again, it can mean much more than just equality between the sexes.

Frankly, I’m at a loss. I have no idea what one should call it. Any ideas? 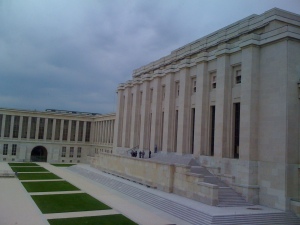 The Geneva II conference agreement of today allows women and children of the city Homs to leave immediately to seek safety. I cannot help but wonder why women’s lives are considered to be more valuable than men’s. It’s the same thinking which allowed women and children to leave sinking boats first, and fuels the stereotype that men’s responsibility is to sacrifice themselves and die for the greater good. Why shouldn’t women do the same?

I was strolling the streets of Beirut this morning when I saw this graffiti on a wall (among several others). Good, important message, still much work to do. 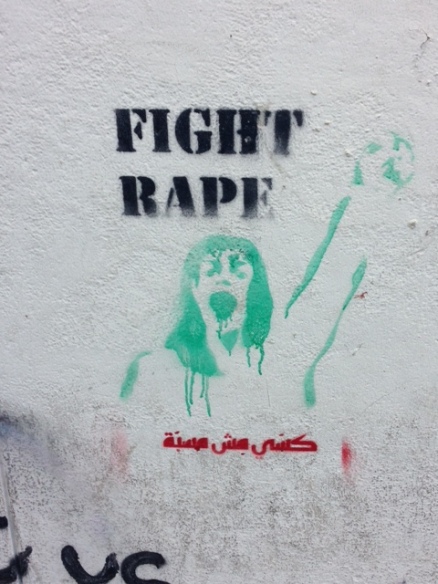 Congratulations to Alice Munro from Canada for winning this year’s Nobel Prize in literature! She is known for her short stories about women’s and girls’ lives. In the 112 years the prize has been awarded, this is only the 13th time that a woman has become a laureate! 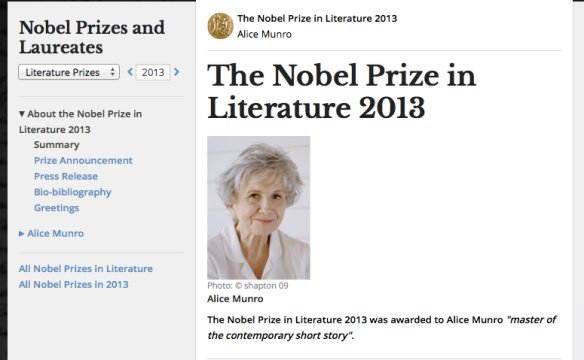 Guido Barilla, chairman of the Italian pasta brand Barilla, has stated that they will never make an advert with a homosexual family, to conserve the “sacredness of the family”. Gay groups have called for a boycott.

Article about the case from The Guardian 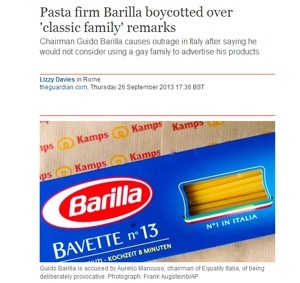 You know you’re concerned with gender issues when a rainbow automatically makes you think of LGBT rights. 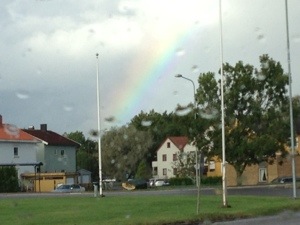 Let’s talk about child marriages. I was recently disgusted by an article about how an 8 year old girl died on her wedding night as she was raped by her 40 year old “husband” (read “rapist”):

Ok, so the practice of marrying girls to older men is not something new, by no means exclusive to Yemen, and we all know it exists, as this documentary shows:

The reasons for why it happens are claimed to be numerous, but one main reason which is often repeated is the wish to protect girl’s chastity and honour, especially in societies where family honour is considered as more important than respecting individuals’ human rights. It is also considered a good idea to marry girls off before they get too many opinions of their own, become stubborn and “difficult” (read: “independent and form opinions of their own”). And then, in times of poverty and crises, families can be tempted to marry off their daughters because they will get money or other benefits from it.

Child marriages are also wrongly excused with religious and cultural arguments, which are (as often) twisted in ways to serve status quo rather than to disseminate religious imperatives of doing good and respecting others.

But I think it’s about time we start calling child marriages by their real names: 1) Pedophilia and 2) Slavery.

How can any man commit a sexual act with a girl, especially a pre-pubertal girl, without being pedophile? And… are they born with pedophile tendencies, or does the society they grow up in breed and encourage acceptance of pedophilia in a way which instigates pedophile tendencies in men who don’t naturally have those urges? Food for thought.

The second point is that child marriages are glaringly similar to slavery. Child marriages are forced. Children are sold off to someone who owns them, in a way which does not allow them to break the bond if they want to. They have to do labour, and are exploited sexually.
More on this from Anti-Slavery International.

This is not to say that child marriages do not also happen to boys, because they do. But in those cases two children are more often married to each other. And yes, men may also be forced into marriages against their will, which is a violation of their rights as well. But again, more often than not, the men still have the power in the relationship due to gender stereotypes.

How to prevent child marriages? It’s a very complex challenge which needs a multitude of approaches, and it will take decades to eradicate the practice and acceptance for it. But first of all, clear laws must be established to ban it, and the judiciary systems must be functional and willing enough to enforce the law and state examples. The police must uphold the laws and abide by them themselves. Then, there must be a widespread awareness change in society, by pointing out all the negative effects it has on the child, the community and the country, in terms of health, education, and economy. Traditional and religious elders and authorities must be convinced and advocate for the ban. Child marriages is a form for gender based violence, which is linked to how women in so many societies in general are discriminated against and considered to be inferiour. So all these initiatives must go hand in hand with similar messages about women and girls’ rights, and recognition that women should have the same freedoms and possibilities as men.

Right. Perhaps we’ll see the end of child marriages in some generations or so. But that in the meantime, we have to keep fighting it.

If anybody recalls about a year ago, the previous Prime Minister of Australia, Julia Gilliard, made a very convincing speech about the opposition leader, Tony Abbott, of how he had been making some pretty outdated and outrageous statements about women in general, and herself.

Now he will be the next Prime Minister of Australia. Oh my…

Walking along in the streets of the old town in Pondicherry, among flaking paint, rickshaws and dust, I see this painting rising in front of me on a wall. A small detail, but still important in a country from where we have heard too many ugly stories of violence against women cases during the last few months. 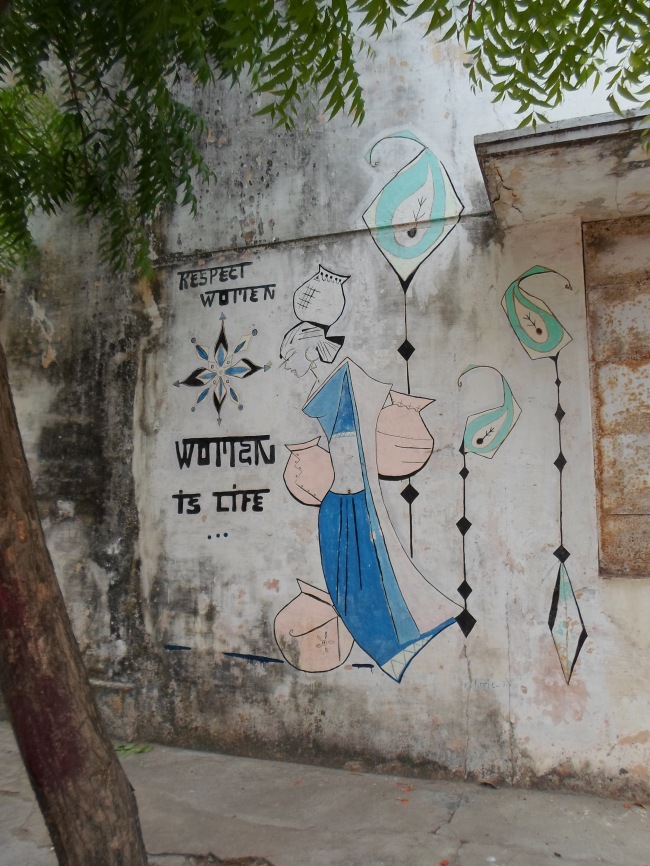