In Norway these days there is a growing consensus, both across the political parties, and in the general public, that drafting to the military should be gender neutral – for both women and men. More importantly still, this is something which the army itself pushes for. The reasoning behind is that the more diversity there is in the army, the better equipped it will be to find solutions to challenges. In addition, warfare today has become so dependent on technology that raw muscle power is not as important as it was before. 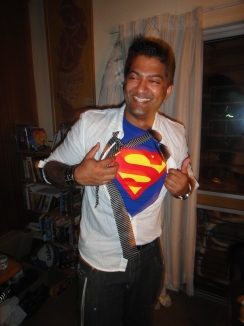 Well, not all heroes have superpowers.

It should be added that very few Norwegians are actually drafted today, and it is mainly those who already want the experience who join. Women are not drafted, but can already today join of their own free will. It is however an explicit goal in the army that the percentage of women at all levels increase.

And honestly, why shouldn’t women also be sent into battle? If women get more rights, why shouldn’t they also take more of the responsibilities? Is it really right to ask only men to bleed and die for their country (or for the interests of the country)? If we truly want a society where everybody has the same opportunities and choices, why should we still keep a system where only women are protected? Skills to be in the army are individual, not based on sex. Further, there aren’t any family reasons for why dad is sent out to fight, and not mom, anymore. Today, when men in Norway can have as long parental leave as women, and where we want fathers to be as important in child upbringing as mothers, women should not hide behind their own skirts if war breaks out (except for the few months before and after the child is born, of course).

The macho stereotype is for men to be strong, not complain and be protective. But demanding only men to sacrifice themselves, and to take the dirtiest and most dangerous jobs is actually discrimination of men.

There are some who argue that female soldiers will make their male co-soldiers do foolish things to protect them, rather than to follow orders, and that women dying in the battlefield is harder for society to accept than if they were men. If that is the case, the army should challenge the stereotypes which lead to such reactions, rather than to accept them. Up through the history women have often been barred from jobs and adventures under the guise of “protection”. If something is truly dangerous, everybody should be equally protected, not only the women.

The best would of course be if nobody had to be sent to war in the first place.

For more on the debate in Norway and the army’s stand on this, click here (Google translate will probably be useful for many).

For more about women across the world who join the army, an article from an American perspective, can be found on National Geographic.

1 thought on “The Hero – the discriminated man?”