The Eiffel Tower. In French, “la Tour Eiffel” is feminine. Despite the tower’s somehow phallic shape.

“I hate genders! I will just never understand how it works”, I have said with frustration to my French teacher. Several of them, actually. Although my level of French after years of hard work has become quite good, there is especially one thing which I just can’t get right: the genders. I take a wild guess almost every time. Is the noun feminine or masculine? I seriously don’t have a clue, as my brain seems incapable of remembering this. Ok, I have learned a few rules of thumbs, such as words ending with -tion most of the times are feminine, and that -isme mostly are masculine. But then there are exceptions. And exceptions of exceptions. So when I’m unsure, I just take a wild guess, only to change it in the next sentence. That way I at least will get right one of the times.

French has two genders. Feminine and masculine. So there is a 50/50 chance that the guess will be correct. Admittedly, it is at least easier than Germanic languages. Norwegian, for example, has three genders. Feminine, masculine, and neutral. I can just start to imagine the complexities for the poor people who have to learn that. But I like that, that there are more options than just the two fixed masculine and feminine genders. It reflects the reality better, actually. 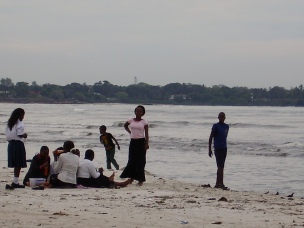 Some fine specimens of mankind, both feminine and masculine. And these Tanzanians use nine noun classes in Swahili.

In Swahili, there are nine… well, perhaps not genders, but categories, at least. The nouns are not only separated according to the genders we can see in nature, but also according to type of animal, material, utility etc. I gave up learning Swahili around the fourth category.

But do grammatical genders affect the way we look at things? Are items with masculine grammatical gender also automatically looked at as things with masculine traits? In Norwegian, ‘tower’ is neutral and ‘spoon’ is masculine, but in French, both are feminine. Nouns often seem to have been given genders quite randomly. And why are some animals given masculine names, and some feminine, while there are both masculine and feminine specimens of the same sort (although the feminine and masculine specimens sometimes are given separate names, in addition. The same applies to their children.)?

In the languages I know, the gender does at least not change from singular to plural. (It does in Fijian, for example. But I don’t know Fijian, so that’s OK.) Although, in French (of course), there is one very interesting exception. Love in singular, l’amour, is masculine. But in plural, les amours, the word has suddenly become feminine. And then we can all speculate if there are any sexist reasons behind this or not.

One should be careful with drawing too many conclusions about how grammatical genders affect our perceptions about things. But one interesting read on the subject is a thesis written by Nadia El-Yousseph in 2006.

What most people who work with gender equality issues agree on is that masculine nouns as a default also lead to certain negative perceptions as stereotypes in society. Why do we say man, or mankind to talk about our own species in general? And why do we call females for wo”men”? Also, as an increased awareness about these things, professional titles are changing, such as the former title policeman, which now has become police officer. Words such as manpower, housewife or maid are also words which bear witnesses of an outdated way of thinking about men and women.

Be it as it is, I conclude that genders is a really difficult issue. It will take a long time before I get it right.